At the stage of constructing a new 496 MW power unit, it was necessary to transport several steel tanks to the power plant building. The weight of one tank reached even 40 tons.

Due to the big height, which was as much as 24 meters, the standard solution of the supporting structure (other than scaffolding) was not available here. Our team proposed the use of modular scaffolding, on which a special track made of steel sections was based.

The Multiserwis Design Studio made the necessary static calculations and the scaffolding assembly plan. The Scaffolding Services Department of Poland took care of the project implementation.

Due to the extremely high load, it was necessary to increase the load-bearing capacity of the scaffolding props.

Our team decided to compact the transoms and bracings by arranging them every 1m of the scaffolding structure height. It also turned out to be necessary to make a foundation of a reinforced concrete slab – in order to ensure adequate stiffness and load-bearing capacity of the foundation.

The supporting structure was made of the ‘plettac Contur’ system. The whole project in numbers:

The drawings were made in AutoCAD. The assembly plan consisted of a set of technical drawings:

The static analysis of the structure was performed in the Robot Structural Analisys Professional calculation program. A spatial structure was modeled, consisting of over 7,000 bars, which resulted in the necessity to define over 2,000 nodes.

The construction of a special track for moving the tanks along the scaffolding turned out to be a serious challenge. Our specialists had to analyze in detail the way the tank could be moved.

From the longitudinal beams (provided by the Employer), the force was transferred to the cross-beams. These gave a response to the arrangement of channels that rested on the scaffolding stands.

The structures designed by Multiserwis proved to be perfect.

Both the design and the execution of the scaffolding for the Turów Power Plant were awarded the 1st place in the “Scaffolding of the Year” competition organized by the Polish Chamber of Commerce for Scaffolding.

What else are we also proud of: 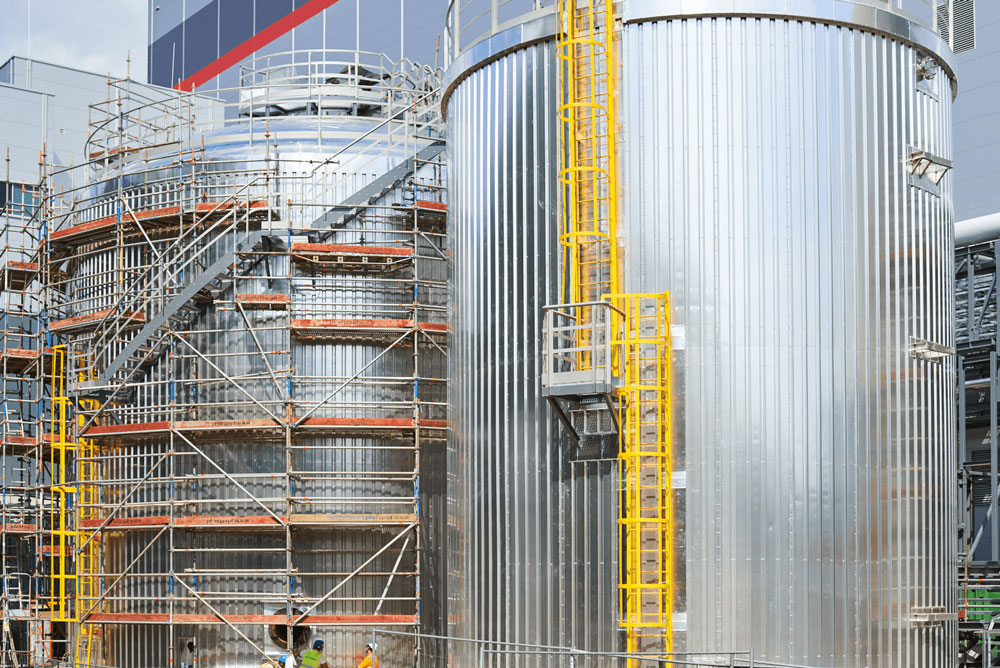